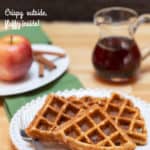 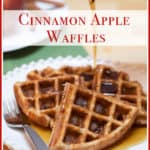 What two flavors taste like fall more than cinnamon and apples? These Cinnamon Apple Waffles are full of sweet, spiced, well-balanced flavors. Grated fresh apples are mixed into a batter punctuated by cinnamon and brown sugar, with tangy yogurt keeping the sweetness in check. They’re crispy on the outside, light and fluffy on the inside – and I share my secrets on how to make them that way!

My husband Robert is the waffle maker in our household. In fact, he brought his waffle iron into the marriage! While his waffles are always delicious, he uses store bought waffle mix. Well, I’m a “from scratch” kinda girl, so one Sunday morning I offered to help out and make the batter. It was a crisp fall day, and there were several fresh apples sitting on our kitchen counter. So, I decided to create apple waffles.

Replacing some of the milk with Greek yogurt, adding cornstarch and putting cooked waffles on a rack in the oven to warm results in waffles that are crispy on the outside, light and fluffy on the inside.

To my basic waffle batter (flour, butter, baking powder, baking soda, eggs, milk, salt) I added grated apples, cinnamon and brown sugar. I handed off the batter to Robert and he did his masterful cooking. While the resulting waffles tasted wonderful, they were a bit soft and not crispy on the outside. The apples added a lot of moisture, even after wringing them out. It actually took several Sundays of cooking waffles with Robert to get the right consistency. Replacing some of the milk with Greek yogurt, adding cornstarch, and putting the cooked waffles on a rack in the oven to warm before serving did the trick!

Cinnamon Apple Waffles are full of fall flavors with a perfect texture – nice and crispy on the outside, light and fluffy on the inside. Yum!

Pin it now to save for later. 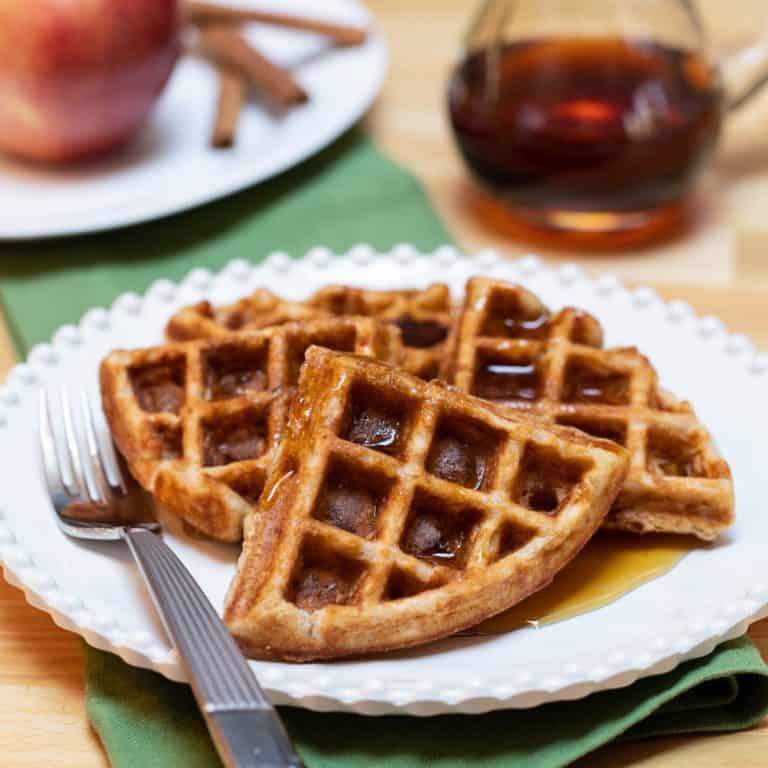 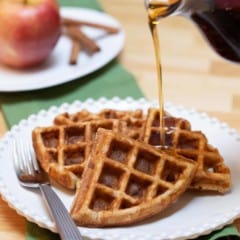