Indian Mulligatawny Soup is a super-flavorful chicken and rice soup with the intriguing additions of curry powder, carrots, apple and thyme.

I’m one of those unusual people who likes winter time in Colorado – I like to snuggle up with Robert next to a fire, enjoying a bowl of warm, delicious soup. Indian Mulligatawny Soup is a particular favorite of ours – which is one of the reasons it ended up as the cover photo on A Well-Seasoned Kitchen®, my first cookbook.

What is Mulligatawny Soup?

Mulligatawny is a curry-flavored soup, originally from East India. Food lore has it that Brits employed by the East India Company during the late 18th/19th century fell in love with this soup, and took the recipe home with them to England. There are many versions – some omit the chicken and add lentils, others include lamb and almonds. Our recipe started with an old one from mom’s recipe box, which she and I added to and updated.

Why is it called Mulligatawny Soup?

There are varying theories as to how this soup got its name. Originating during the British Raj, or when the brits ruled India (1858-1947), one idea is that the name was the Brit’s incorrect pronunciation of a soup served to them called milagu tanner – or “pepper water” – in the southern Indian Tamil dialect.

What is Mulligatawny soup made of?

We start with sautéing onions, celery and carrots in butter, then blending in a bit of flour and curry powder. In addition to throwing in the basic ingredients of chicken, rice and chicken broth, mom and I also added chopped apple and thyme for additional flavor. We finish it all off with a bit of half and half, for creaminess. So colorful, so delicious!

Here are a few variations you can also try with this recipe:

How to Make Indian Mulligatawny Soup

Here are the easy steps involved in preparing this amazing soup:

Serve This Mulligatawny Soup Recipe with:

Mulligatawny Soup is very hearty and doesn’t need much on the side. I like to serve with a simple tossed salad and a slice of toasted French bread.

How to Store, Freeze, and Reheat this Mulligatawny Soup Indian Recipe

If you have leftover soup, place it in a sealed container and refrigerate. It will last 3 to 4 days. Reheat in a saucepan over medium heat; bring to a low simmer and cook until heated through. I don’t recommend freezing leftover soup with half and half in it. The texture can become grainy and the flavor can be decreased.

If you want to freeze this soup to serve later: don’t add the half and half. Prepare it up to that point (cooking with rice, apple, chicken, thyme and salt and pepper), then place in an airtight container and refrigerate. Make sure to leave around 1 inch of space at the top of your container (between the soup and the lid). Once chilled, place in the freezer. It will last for around 1 month.

Thaw overnight in the refrigerator. Place in a large saucepan over medium heat and bring to a simmer. Stir in half and half and simmer for 5 to 10 minutes.

What veggies can I add to Mulligatawny Soup?

Should Mulligatawny Soup be puréed?

No, you shouldn’t purée our version of Mulligatawny soup. There are other, vegetarian versions, most often calling for lentils, that are puréed.

Yes, mulligatawny soup can contain meat. Our version calls for chopped chicken; I’ve seen others that called for lamb. 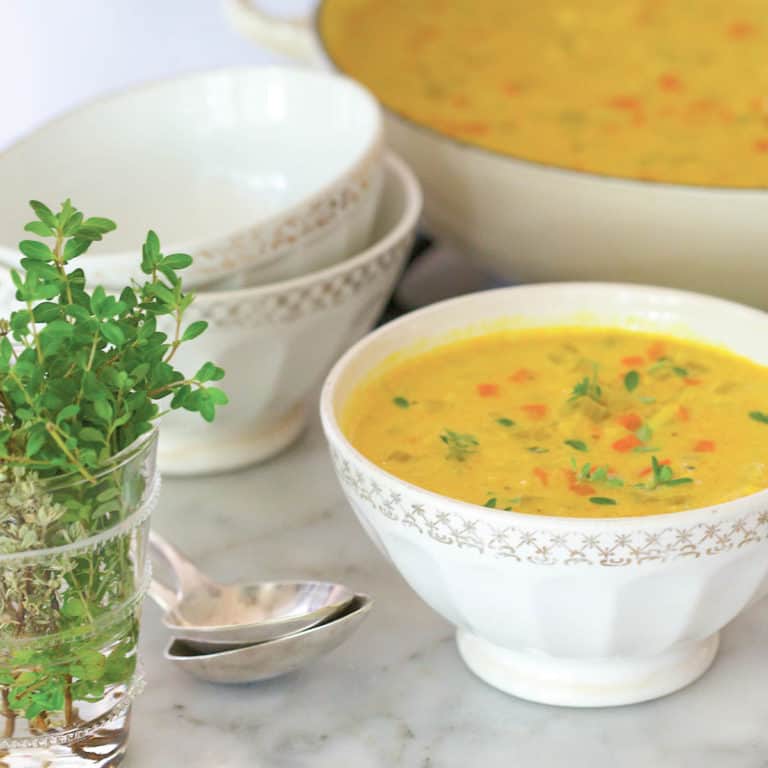 (See dairy-free and gluten-free adaptations in the Notes section at the bottom of the recipe.)

Dairy free: Substitute coconut milk for the half and half.

Gluten free: Substitute 1 1/2 tablespoons cornstarch for the flour. Stir cornstarch into 1/4 cup water until smooth before adding to soup. Use gluten-free chicken broth.

Make ahead: Soup can be made up to 24 hours in advance, cooled to room temperature, covered and refrigerated. Reheat over medium heat. If soup has thickened while sitting, thin with additional chicken broth. 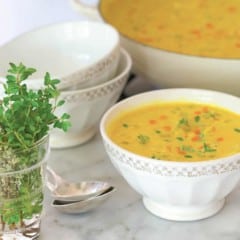