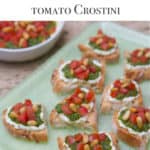 Tomatoes and Pesto with Goat Cheese Crostini is an elegant, crowd-pleasing appetizer that I’ve been making for years. It’s just the kind of recipe I love, that I’ve been perfecting since I was in my teens – easy and impressive. Plus, It’s super flexible, too. Serve the crostini already assembled, or as a dip with the toasted bread on the side.

Festive red tomatoes and toasted pine nuts top vibrant green pesto, making these Goat Cheese, Pesto and Tomato Crostini bright and appealing. And, they’re layered with rich, varying complementary flavors and textures – tangy, earthy, bright, sweet and herb-y. Plus, it’s so easy to prepare it’s foolproof. And, it’s flexible; serve it as a dip with toasted bread on the side. Or, set up a Crostini bar and let people assemble their own!

As always, the quality of the ingredients is the key to this simple recipe. Here are some tips:

Here’s how to create these easy and impressive two-bite appetizers:

If you are short on time, skip assembling the individual crostini and serve the Goat Cheese, Pesto and Tomatoes as a dip, with toasted bread pieces on the side (see “Variation” below). It’s still has that pop of color that makes everyone want to try it!

The unassembled crostini – baked bread slices – can be stored in a tiptop baggie for up to 5 days. In non-humid climates I would store at room temperature. In humidity, I would put in the refrigerator. Bring to room temperature before assembling. To keep them from getting soggy, assemble shortly before serving.

How do you eat crostini?

Unassembled crostini can be eaten list any other toasted bread – even at breakfast! With the toppings in this recipe on it, I serve it as an appetizer or as part of an antipasti course.

What is the difference between crostini and bruschetta?

Both crostini and bruschetta are toasted bread slices. Crostini are smaller and often made with more dense bread. Bruschetta are traditionally rubbed with garlic, brushed with olive oil, seasoned with salt and grilled.

Do you serve crostini hot or cold?

Crostini can be served either hot or cold. I prefer to serve this recipe at room temperature.

I prefer using goat cheese in this recipe. It’s creamy, making it easy to spread on the crostini, and it’s tangy flavor adds another dimension to the dish. In addition, a side benefit is that goat cheese is easier to digest than cow’s cheese because it has smaller fat molecules and less lactose! 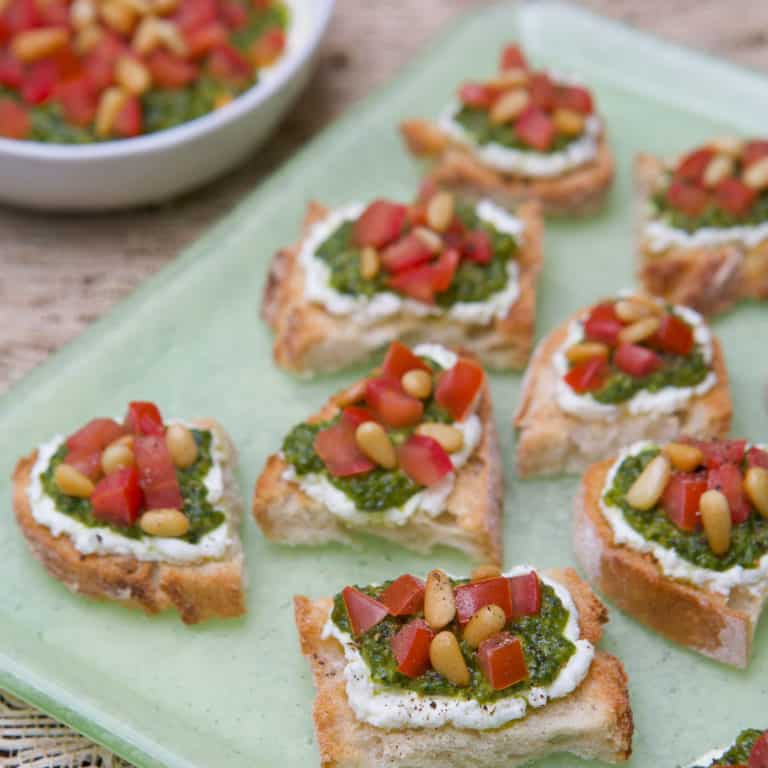 Variation: Serve as a dip. Spread goat cheese in bottom of shallow baking dish. Spread pesto evenly over the top. Scatter tomatoes over top of pesto. Scatter pine nuts over tomatoes. Season with salt and pepper, to taste. Serve with crackers.

Tip on pesto: Our favorite pesto recipe is Spinach Basil Pesto. You can use your own favorite recipe, or store bought works okay, too. Just make sure to purchase the fresh, refrigerated pesto, not the jarred stuff. 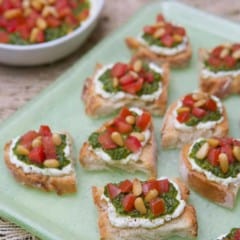